Doctor Who – The Silurian Dawn

As a child of the 80’s, Peter Davison’s youthful take on the Time Lord hero of Doctor Who was a big feature of my television landscape. I’ve recently been revisiting many of those adventures, with their synth soundtracks, playful use of the series’ past mythology and surprisingly high body-counts. The Silurian Dawn is a short story intended as a tribute to a slice of television history and Davison’s take on the Doctor.

The pale room inside the box was almost pleasant after his cell. The walls were decorated with round indentations that emitted a gentle, soothing hum. If he’d not still been held a prisoner, Hrathta might have taken the time to enjoy the comfort of such a clean, well made and, above all, warm environment. It reminded him of the solarium shelter that his Clutch occupied during the darkest winter months.

Unfortunately, the presence of the apes was inescapable. They made his scales itch with disgust. The chief of his two captors, the one with blonde fur on his head, was moving chaotically round the hexagonal machine that occupied the centre of the room. A glass cylinder rose rhythmically up and down from the heart of the device, pumping life into the controls. It struck Hrathta as a grown rather than a built thing. For apes, it was almost impressive.

Beneath the device he could see the captured metal case containing his explosives. Just a few minutes more and the apes’ revolting laboratory would have been reduced to rubble. The memories of the horrors he’d seen there would never leave him. All those murdered eggs. If these two hadn’t interfered, Hrathta would have put a stop to it.

The ape darted to one particular control, his beige fabrics flapping like the wings of an Archaeopteryx. It always astonished Hrathta that the apes chose such flimsy coverings. His own cybernetic chestshell was not merely elegant. It also served as a source of heart regulation and an emergency medical aid when needed. The Senior Clutch had rejected such additions with considerable disdain, but that was their way. Hrathta respected their mental abilities far too much to resent their superior attitude to the other Clutches.

The yellow topped ape had come to a standstill. He turned to his companion who was poised alertly in one corner.

‘Are you sure this is a good idea, Doctor?’ asked the other ape. He was wrapped in pitiful coverings of black fabric. Hrathta liked the fur on his head though. It was a coppery orange and reminded him of the tropical fish that swam in the pools of the shelter. But he was still an ape and that meant Hrathta wanted to kill him. His grip on Hrathta’s confiscated weapon was regrettably steady.

‘Well, what would you prefer, Turlough? Another massacre?’

Although he sounded angry, Hrathta sensed that these two apes were companions of a sort. Perhaps they were a mating pair. He could never quite remember how their biology was supposed to work. In general, they seemed to make their relationships needlessly complex.

‘No Doctor. And I explained that. I was trying to save your life’

‘Then let’s try to save another, shall we?’

The ape called Doctor turned to Hrathta and bared his teeth. Sometimes that meant danger but not, it seemed, in this instance.

‘Oh I don’t think our passenger is going to harm us. Are you?’

Just give me the chance he thought.

Out loud he asked ‘Where are you taking me?’

The Doctor tugged a red lever on the hexagonal machine. A section of the white walls swung open.

Outside, it was night. And they were in the open. Hrathta knew that this blue puzzle box – this TARDIS – was a travel machine but it was still disorientating to find that the cold grey walls and wire fences of the apes’ research complex had been replaced by the most beautiful landscape that he had ever seen.

The forest clearing was surrounded by plants with luxuriant leaves, their closed blooms still elegant in the moonlight. A narrow stream ran close by. Hrathta could hear the rumbling sounds of waterfalls in the distance. Birds with scales and feathers slept in lines on the branches of the huge trees that towered over them. The soil beneath his feet exuded warmth.

The Doctor inhaled deeply through his nostrils.

‘Beautiful, isn’t it?’ he said quietly.

Hrathta couldn’t find the words to answer him. This place was how he’d always imagined his world would be after the apes were finally gone.

‘There was a terraforming expedition here’ explained the Doctor. ‘Things got rather out of hand and the planet was left to its own devices’

He spread out his hands.

‘I think it could use some new custodians, don’t you?’

Before Hrathta could answer, the Doctor had vanished into his strange box. He re-appeared a moment later with the case containing the explosives. With a terrifying disregard for danger, he dropped it into the centre of the clearing. Hrathta couldn’t help flinching in fear.

There was no explosion.

The Doctor bared his teeth.

‘Turlough and I will be going now’

What madness was this?

‘You’re leaving me here?’ he demanded.

‘But you can’t! What about the apes…the humans? They’ve been experimenting on my people’s eggs! Dissecting them like…animals’

The Doctor shook his head sadly.

‘That doesn’t justify what you were planning. Mass murder on that kind of scale. There has to be another way’

Hrathta felt suddenly tired. What else was there but revenge?

‘I’ll make sure people know about what’s been happening. They’ll put a stop to it. Humans aren’t all the same, you know, any more than Silurians are’

He indicated the case.

‘And besides, you have decisions to make’

With surprising speed, he disappeared into the box which almost instantaneously faded from view. The other ape must have been waiting at the controls.

So this was how his mission ended. Did the Doctor mean Hrathta to blow himself up now?

He opened the case. There were no explosives inside. There were eggs. Dozens of tough Silurian eggs. All the ones that had been held in the human laboratories. Safe and waiting to hatch.

For the first time in years, Hrathta smiled a reptile’s smile.

The sun dawned on his new home. 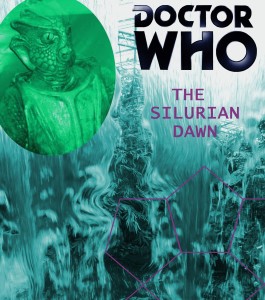