Phillip lead the way down the spiral stone staircase, as was only proper. He was, after all, the visiting dignitary. His reptilian escort kept a few respectful steps behind him, the sound of their metal-clad feet echoing around the damp walls. In the green light from the lamps, they looked even more like snakes. An ignorant man might have mistaken them for guards.

Phillip had no need of guards.  The young nobleman had been chosen on account of both his diplomatic knowledge and his easy charm. Things always went well for him. No-one doubted that he would establish peace between his people and those of the Serpentine Empire.

He reached the foot of the stairs and stepped into a pillared chamber with no other doorway. Phillip thought back over all his past successes and those now surely to come. Life had been kind to him from the start. Handsome and talented, untroubled by dark thoughts, there was little in the future for him to fear.

The escort were still on the stairwell. They slammed the door shut behind him.

Phillip heard the key turn in the lock and knew that he was now a prisoner.

It was almost a relief. 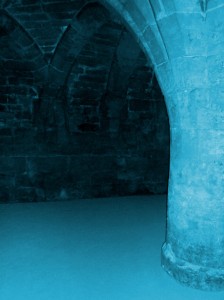