Art Room: Doctor Who and the Green Death 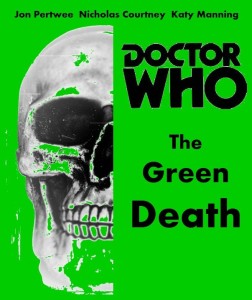 Doctor Who – The Green Death

I’ve recently been distracting myself from the general misery that is in the news by watching some classic 1970’s episodes of Doctor Who.  I particularly enjoyed a surprisingly prescient 1973 adventure entitled The Green Death. Featuring the collapse of local industry, ecological mutation – in the form of wrigglesome giant maggots – and a company driven by efficiency at all costs, it anticipates many of the concerns of the current green movement. It is at the same time, very much a product of its era – especially the groovy fashions and facial hair – and so I imagined suitably Pop Art tinged poster for it had it been a film.

You’ll be pleased to know, they got rid of the maggots in the end.