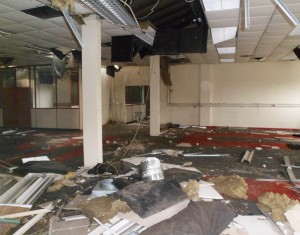 They had targets and objectives. There were job titles, acronyms and jargon.

They thought about their careers and where they would go next. They had one-to-ones, team meetings and, when they were unlucky, disciplinary hearings.

They sent e-mails to each other, complaining about their colleagues and arranging nights out. They went to the coffee machine and the toilet, sometimes just to kill time.

They fancied each other and wondered about each other.

Only debris remains behind.