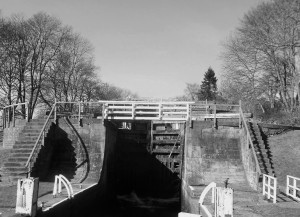 One of the most notable features along the Leeds-Liverpool canal, the Five Rise Locks were completed in 1774. They are the steepest set of lock gates in Britain. Even seen from a distance, they have a vertiginous feel.

The gates themselves are the tallest in the country. They were replaced during maintenance work in 2012. This photo shows a lock that is nearly emptied and you can see how impressive the gates are. 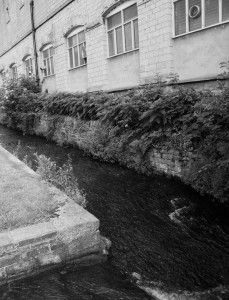 Running alongside the locks are channels down which water runs at great speed. It’s very relaxing to stand and watch these man made streams.

The Five Rise Locks have a special place in my heart as I went there on my first school trip, when I was eight. For years afterwards, I had a vague memory of walking along narrow bridges that crossed high over water. I couldn’t place where it came from until I found myself back there as an adult. Some places just seem to stay with you.