Recently opened at the Yorkshire Sculpture Park, Back to Land is a collection of work by the  influential Castleford-born artist, Henry Moore. Over a very varied career, Moore’s prolific output ranged from monumental sculptures – like the one in the photograph above, in which the human form was presented in abstracted, sensual form – to war drawings of people sheltering in subway tunnels during the London blitz. He made a considerable impact on the development of sculpture as an art form in Britain. As his daughter said in a recent interview in the run up to Back to Land, Moore’s work was created for the viewer to experience on its own terms. His primary reference points were the body, the landscape and the interaction between the two. While much of his output contained abstract elements, it didn’t require the additional information often required by Conceptual Art to fully appreciate it. As such, while regarded as a radical in his day, he has now become seen as part of the Art Establishment. 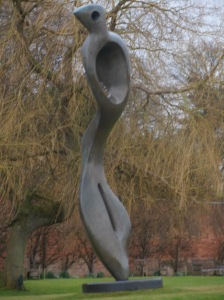 Henry Moore is an artist whose work I have loved ever since I first encountered it several years ago. His forms are at once familiar and alien, distorted and attractive. They have an innately self-possessed air, inviting us to enjoy them without seeking approval. Some of them are reminiscent of the totems of ancient civilizations while others seem like visions of how the human body might look some time in the remote future.

Back To Land brings together well over a hundred of Moore’s creations. Many are presented in the four rooms of the Underground Gallery while others have been placed in the grounds of the Sculpture Park itself. It’s wonderful to see some of these pieces in the open air as this was where Moore intended them to be seen. They look very at home  in the Yorkshire landscape, perhaps reflecting how the artist’s place of birth helped to shape his vision. 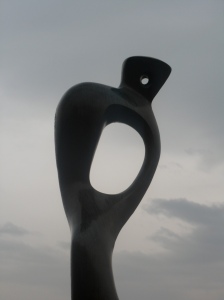 The works on display in the Underground Gallery bring home the sheer range of Moore’s ambitions as an artist. From tiny abstract landscapes to a huge, bulbous form modelled on an elephant skull, this is a visual feast.  I found the best way to experience it was not to follow the pieces in the order that they were presented but to go wherever my eyes were drawn to. I found that Moore’s best work just kept bringing me back to it, time and again.

Although the content is diverse, some striking similarities appear. For example, the sculpture  above, comprising two separate segments, is echoed in a  tender, drawn work of two women unravelling wool. Many of his most interesting creations  rest on the interaction between two separate but related forms.

For all Moore’s standing as part of the Art Establishment, to be around his sculptures and paintings is a deeply liberating and rewarding experience. Back to Land is on at the Yorkshire Sculpture Park until 6th September. Entry is free and it is well worth a visit.