One of the resolutions I’ve found myself making for 2015 (despite having vowed I’d make no such thing) is to visit more new places. I began with a trip with a friend to the Tetley in Leeds to see the Jerwood Drawing Prize show. This is a competition which is open to any submissions, with those included in the exhibition and the winning three entrants selected by a panel.

The Tetley is an imposing building that once housed the famous brewery of the same name. The Boardroom, which is open to visitors, conjures up images of businessman of the old fashioned sort. All cigars, whisky glasses and  golfing trousers. Indeed, something of that sense of corporate power still seems to cling to the building, despite its having now become a successful arts centre.

The exhibition contains a broad diversity of techniques and mediums, some of which deliberately stretch the definition of drawing. For example, one piece, Enigma by Hilary Ellis, appears at first glance to be a large fragment of ancient text. Closer inspection reveals that the symbols have in fact been created by dozens of pieces of thread laced through punched holes. A more representational piece is Breakdown by Jonathan Huxley. A small, initially hazy image of a car and two figures, the more you look at it, the more the details and an inherent sense of drama becomes apparent. Alex Chalmers’ Content Run uses endlessly replicating short pen strokes to create a rippling field of blue that, to my mind suggests, complex, abstract systems of information. Hannah Dawning’s Vertical Panorama – Oak Tree is a long, photo realistic image of a tree that unfurls out on to the floor, perhaps in simulation of roots. There are many more pieces and the show is well served by being spread throughout several of the rooms in the building. It creates a pleasing feeling that the art is redefining the space around it. All the same, the afterimages of those men from the Boardroom still seem to walk the corridors, adding an extra, unexpected frisson.

I have to be honest, the winning entry, Alison Carlier’s sound piece Adjectives, lines and marks, left me cold. A woman’s voice  tonelessly describing drawing technique, it didn’t particularly excite or intrigue me, even if it was one of the most experimental pieces. I felt far more drawn Jemma Appleby’s wonderful #2230113, a dramatic and mysterious grayscale work conveying a sense of light and movement in a mechanized environment. This was by far my favourite piece and I’m hoping to see more of her work in future.

The Jerwood Drawing Prize is on at the Tetley until 1st March when it continues its tour. The sheer variety of the work on display means that there will be something to please and annoy everyone, making it a thought provoking experience. I was particularly pleased to see it in the context of a building finding a new function yet with echoes of its past still present. 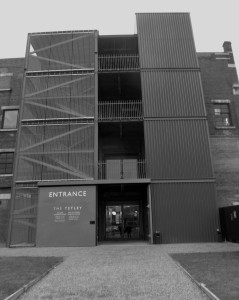