Design Room: Designing my own t-shirt

One of the things that I have decided I want to do in 2015 is to have a go at designing some of my own t-shirts. I like the notion of wearing something that is unique to me. In a way, of wearing my own work.

I’ve begun with a design made using an image I created for a Facebook page. This page was formerly called Art Op 21, a play on the term Op Art, one of my favourite movements from the 1960’s. Lady Gaga had already switched Pop Art round to create the album title ARTPOP, so I saw no reason why I couldn’t do something similar. The 21 comes from that famous 60’s spirit of optimistically looking forward to the 21st century, even if that was an optimism that was to prove ill-founded in some respects.

The design was created using PowerPoint. As this produces images with comparatively low resolution, it was only possible to transfer a small version on to the t-shirt. However this suited  the minimalist look I was I hoping to achieve with the design. Start simple, I thought. You don’t have to be Alexander McQueen.

My work done, I ordered the t-shirt from a company called Spreadshirt. It arrived yesterday and can be seen below modelled by me! 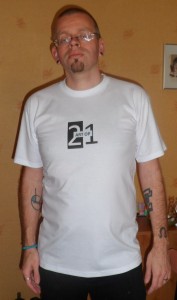 It’s an admittedly basic start and for later work I’ll be aiming for more complex designs made using different software. All the same, it was very exciting to create something that I can use in my day to day life. To be honest, I couldn’t wait to wear it! 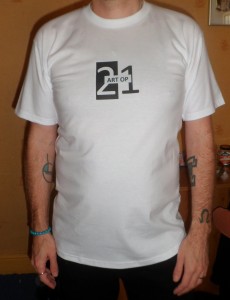