The Ten Photos From 2014 That I’m Most Proud Of

Almost wherever I go, I take my camera with me. Maybe not on dates, never when I’m volunteering and certainly not to the bathroom, but pretty much everywhere else. That means that by the end of twelve months, I’ve built up a lot of photos. Some are good, some are indifferent and a few are ones that I feel very proud of. So here are the ten photos from 2014 that, for different reasons, have a special place in my heart. 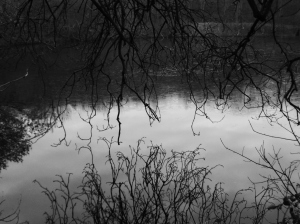 This was taking on a long walk around Farnley on a freezing cold January morning. The water in question is a wonderful, hidden pond that I’d grown very fond of while living in the area. I knew I was moving away in a few days time, so this photograph was my farewell to a special spot. It proved very popular on Flikr. 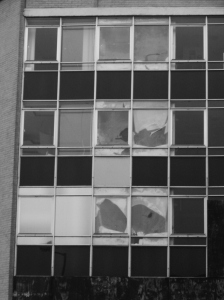 I like the idea of using photographs of my changing surroundings to create abstract art. The surface of this abandoned office block near Kirkgate Station in Wakefield had an austere, multi-textured quality that seemed to lend itself to this very well.

A very relaxed duck sleeping peacefully by Leeds Liverpool Canal. I pass these guys regularly on my morning run.

A view from beneath a bridge near the Royal Armouries in Leeds. I love the curved, angular effect created by the underside of the bridge and the contrast with the gently moving water. 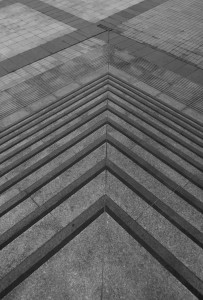 Once more using a detail from a city setting to create an abstract image, these are steps leading down from Bridgewater Place in Leeds. I like the idea that beneath our feet and all around us there are beautiful shapes and angles if we only stop and see them. 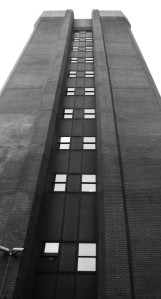 This building is straight out of dystopian 70’s Sci-Fi novel and this image was very much a homage to that genre. Once again, the lines create a pleasing abstract effect.

But it’s not all architecture on my travels. This shot was taken in Roundhay Park, one of my favourite haunts in Leeds. The stream running downwards from the smaller of the park’s two lakes is so relaxing to watch.

I adore electricity pylons. They look so confident and mysterious. This shot looks straight up through the middle of one that stands near a power station. I like the contrast between the fluffy clouds and the lines and angles of the humming giant. 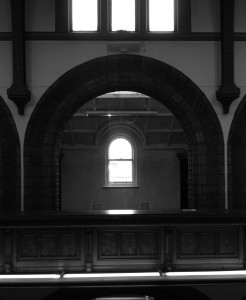 Taken during a tour of Leeds Central Library, this shot was only possible because we were able to go up on the balcony of the beautiful Local History Library. I love the way the light is coming through the window and the graceful curve of the arch.

I seem to spend a lot of time in Leeds Library. Something about the look and feel of the place makes it a pleasure to be there, whatever the time.