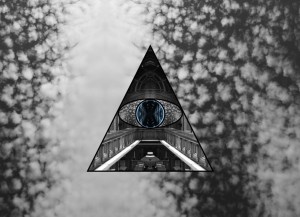 The piece above was created using photographs of the sky over a patch of wasteland and elements from photographs taken of Leeds Library.

The basis for the design was the all-seeing eye. This image appears in various different guises throughout the world. Conspiracy theorists like to see this as evidence of a secret society called the Illuminati who are supposedly trying to control Western society through the media. They claim it can be found in everything from Lady Gaga and Beyoncé videos through to the classic silent movie Metropolis. In fact a surprising number of their theories bear more than a passing resemblance to the plot of Metropolis, as though members of the Illuminati had sat down together and said ‘Christ, this world domination thing would make a good film as well’ The more extreme amongst the theorists have taken it one step further and genuinely believe that the entire Western media is being run by lizards. David Ike, a British footballer turned writer and popular pundit in the US has made particular capital out of this. Entertainingly, his lizards sound almost exactly the same as a race of homo reptillia from a 1970 Doctor Who story.

The real life Illuminati was an 18th century Bavarian movement with entirely noble aims of promoting equality and challenging superstition. They allegedly had links to the French revolutionary movement – the grand nightmare of the European conservative – and appear to have been opponents of the Free Masons.

It is interesting to note the strongly anti-intellectualist attitude of many of the present day conspiracy theorists. Their argument seems to break down into a belief that people smarter than us are controlling us, as though the acquisition and use of thinking were itself a bad thing. Perhaps when they say lizard it’s just another word for liberal. My design, by including elements of a public library celebrates thought and equality, things that the conspiracy theorists seem so strangely afraid of.

The repeating and reflecting motifs reflect something else. People like to build patterns from things, especially if they find them in more than one place As the comic writer Alan Moore – who explored themes of conspiracy and freemasonry in his superb From Hell –  pointed out, people are comforted by the thought of a secret society out there that can be blamed for everything in the world that they don’t like. We only have to look at the theories that have danced around all sides in the Middle East to see how a multitude of explanations can rush in to fill a bloody mess.  The idea that Big Brother is not watching you could be just as scary as the thought that he is. Sometimes though, it’s hard to look at the world without wondering whether enough people could ever really work together to sustain any kind of world conquering conspiracy for long.

As for the Illuminati, I very much doubt that they exist. Which in a way is a shame. A secret society pledged to spreading enlightenment and equality might be the best hope for the human race. They certainly sound like they would be progressives. And I do like lizards.

Now look into the eye and surrender…