I’ve recently begun reading a book about the artist Richard Long which I found in Leeds Library. Alongside some gloriously moody and stark photographs there are some short – and thankfully accessible – essays describing his working methods. Long’s work involves him going out into the landscape and either creating art with what he finds there or bring what he finds into the gallery to create the art. The pieces are normally simple in form if monumental in scale. His work is refreshingly free of new age romanticism – it is about experience and observation rather than a nostalgic yearning for the life of a previous time. Long is one of the leading figures in this type of Land Art.

Inspired by what I had read, I decided to create a couple of very small pieces of Land Art yesterday during a walk in Roundhay Park in Leeds. Roundhay Park is one of those treasures of the North that can be a bit overlooked. It’s a huge place, with areas that are very cultivated and others that are far denser and wilder. There are two big lakes which are home to lots of ducks and geese as well as several families of swans.

My first small Land Art project was to gather seven randomly chosen stones from a stream and place them in a small circle nearby. This both used the materials available from the land and also changed it. There were now less pebbles in the stream and their position in relation to each other had been changed. It meant that I had altered and made a mark on the landscape without bringing anything new to it (compare for example with Graffiti Art)

Next I found a space next to a beautiful, broken down old wall. I photographed this almost exactly as it was except that I picked up two twigs and buried one end of each into the soil so that they were standing upright. As a result, an apparently entirely natural scene has a man made element within it – again without bringing in any material that wasn’t already present. A sort of manual version of Photoshop! 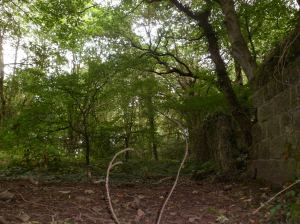 Creating this pieces felt slightly transgressive – would a passer-by think I was mad, rooting around for stones and twigs? There was also a childlike feeling to it, a reminder of making mud pies on broken slates.

As with all Land Art, huge or tiny, the results are ultimately impermanent. Richard Long’s pieces vanish over time. Mine were probably gone by this morning. The photographic record and this blog are all that remain of it, a man made moment frozen in time. Of course, this is ultimately what so much photography comes down to – capturing in one moment what will be lost in another. However I feel that Land Art is particularly well suited for conveying these ideas of impermanence and change.

Naturally, it is also possible to turn the concept on its head. To take photographic images of the landscape and then alter them to create entirely new landscapes that are accessible only to the mind and the individual’s interpretation. Using photos of trees taken on a recent walk, I created the strictly geometric image below.

This piece, like similar ones I have created, are an experiment in bringing together the organic and the technological, synthesising a hybrid from the results. They come from personal experience too: walking through the woods with EDM, ambient and electro vibrating through my earphones.

As I was leaving the park, a fallen twig or small branch that was floating on the water of the lake caught my eye. It had nothing to do with Land Art, but in that moment, with its reflection so clear in the water, I thought it had a special beauty all of its own 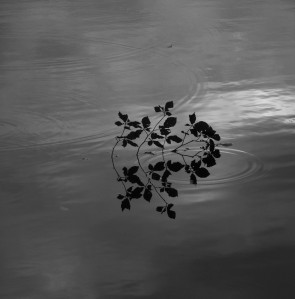 With the promise of an Indian Summer ahead, I hope you also get the opportunity to enjoy some walks wherever your feet take you.