It’s been a stressful couple of days for a few reasons – most notably the smoke alarms in the empty house next door going off for over 24 hours and having to badger the estate agents to get them turned off – so today I decided to try and unwind with some classic SF. I’ve been reading quite a lot about 60’s art movements recently, so it felt like a fitting time to revisit that decade’s most acclaimed movie from the genre, Stanley Kubrick’s 2001 – A Space Odyssey.

A lot has been written about the 2001 over the years. A bit like 1984, the fact that the year in which it was set has come and gone and bore little resemblance to the fictional version doesn’t diminish its appeal.

It’s a famously ambiguous film and quite hard to pin down. The story covers a huge length of time, from the dawn of man to the birth of a new species beyond the infinite and yet it moves at a graceful and leisurely pace. The spaceships – which really are beautiful –  dance slowly through space rather than go roaring into battle. Man is pitted against machine and yet the computer HAL is the only character  with what might be called a personality. This is a film very concerned with humanity and completely disinterested in people.

It’s quite brilliant. In many ways the experience of it is more like walking through an art gallery than watching a film. We aren’t being asked to identify with a character’s journey but rather to engage with a conceptual exploration of human evolution and the ways in which technology can both enhance and endanger change. Even the sketchily drawn characters feel in line with Avant Garde  trends of the 60’s, echoing the drive of Minimal Art to strip things down to their basics.

What I really love about the film is the presentation of space. Not just the space of the title, but all the different environments in which the story unfolds. This is a precise and geometrical world. Shapes move in  symmetrically from either side of the frame, objects are placed in perfect lines in front of us, blues and reds contrast in a manner Mondrian would approve of and the two most significant ‘objects’, HAL and the monolith, are essentially a circle and a block respectively. The result feels vast, beautiful and ultimately optimistic. The ending, which suggests the end of one phase of humanity and the dawn of another embodies how I imagine the idealism of the 60’s must have felt. It almost goes without saying how trippy it all is.

Symmetry and space are things I have frequently found myself drawn to. There is something about them that suggests not just freedom but the possibility of change and metamorphosis. Below is an image I created of an imagined birthing place using a photo of the edge of a building as a starting point. It’s called Consciously Artificial. 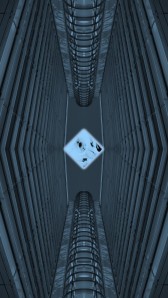 Mentioning Mondrian earlier brings me to one of the shows currently on display at Leeds Art Gallery. Marlow Moss was a constructivist artist who was inspired by and developed Mondrian’s abstract ideas. Her work explored movement, light and space using painting, relief work and sculpture. The Gallery is staging an exhibition of her work which is well worth checking out for anyone interested in mid 20th Century art. The paintings in particular are wonderful. Consisting of primary coloured squares and rectangles and black grids, they feel boundless and utopian. Any trace of sentimentality has been rigorously removed but what remains feels not heartless but deeply concerned with the structures of the world and the possibility of harmony between them. It’s surprising to find such similarities between an artist working between the World Wars and a film from the swinging 60’s.

Anyway, I’m now really feeling the pull of classic cinema so I might find finding myself revisiting Psycho sometime soon. We all go a little mad sometimes.